The DSM-5 classifies Autism Spectrum Disorder (ASD) as a type of neurodevelopmental disorder, which means there is atypical growth and development of the brain or central nervous system, resulting in their abnormal functioning.

The Diagnostic and Statistical Manual of Mental Disorders 5th edition (DSM-5), published by the American Psychiatric Association, is a handbook used by professionals around the world to diagnose mental disorders. The DSM-5 contains descriptions, symptoms, and other criteria (such as how many of these symptoms must be present) to diagnose a mental disorder.

This diagram below highlights a few of brain regions that are structurally distinct in individuals with ASD. Please note this is not a comprehensive list of all the structural differences. 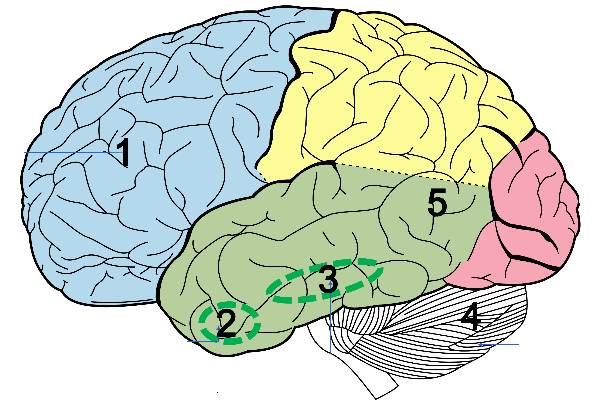 2. Amygdala - structural variations in the size of the Amygdala cause more difficulty with regulating their emotions and stress.

3. Hippocampus - structural variations in the size of the Hippocampus causes problems with sleep, learning and memory.

To truly understand what ASD is, we need to look next at the symptoms and the ways in which the changes in the brain actually manifest as recognisable behaviours we can observe and relate to.

The symptoms of ASD can be categorised into two domains:

It’s worth remembering that Autism is a spectrum disorder which means that the symptoms can vary from person to person. To learn more about how these symptoms can present, let’s explore the categories in more detail.

For someone to actually be diagnosed with ASD they will demonstrate persistent difficulties in social communication and social interaction as evidenced by the presence of all of the following symptoms, across multiple contexts, currently or historically:

This can range from abnormal initiation of social interactions and difficulty with normal back-and-forth conversation; to reduced sharing of interests, emotions, or thoughts; to a complete lack of initiating or responding to social interactions.

This can range from difficulties adjusting behaviour to suit various social contexts; to difficulties making friends; to a complete lack of interest in peers.
To put the definitions into context, you may notice how children with ASD can often appear withdrawn from social groups, perhaps in the playground for example, or wound up in a confrontation with other children because they are struggling to process the social interaction and are, as a result, having a stress response.

You may have noticed children with Autism will often obsess over a particular toy or have an intense interest, at the exclusion of other interests, in a particular computer game, hobby or other activity.

For someone to be diagnosed with Autism, there will be at least two of the following symptoms present either currently or historically:

Stereotyped or repetitive movements, use of objects, or speech, such as lining up toys or flipping objects, repeating the words of others back to them, or repeating idiosyncratic phrases.

Insistence on sameness, inflexible adherence to routines, or ritualised patterns of verbal and nonverbal behaviour, such as extreme distress at small changes, difficulties with transitioning between places or activities, rigid thinking patterns, or greeting rituals.

Highly restricted, fixated interests that are abnormal in intensity or focus, such as strong attachment to or preoccupation with unusual objects.

Hyperreactivity or hyporeactivity to sensory input or unusual interest in sensory aspects of the environment, such as apparent indifference to pain or temperature, adverse response to specific sounds or textures, excessive smelling or touching of objects, or visual fascination with lights or movement.

For an individual to be diagnosed with ASD, symptoms must be present at an early age, but may not fully manifest until social demands exceed the ability of the individual to deal with them.

The symptoms should cause significant impairment on social, occupational or other important areas and not be better explained by intellectual disability or global development delay.

If an individual is diagnosed with ASD, the medical professional will also specify if it is:

Individuals with Autism Spectrum Disorder may have one or more of the following conditions at any time during their development:

An ASD diagnosis includes a severity level, which is used to show how much support the individual needs.
The diagram below shows how Autism is a ‘spectrum disorder’ because there is a wide variation in the type and severity of symptoms people experience. 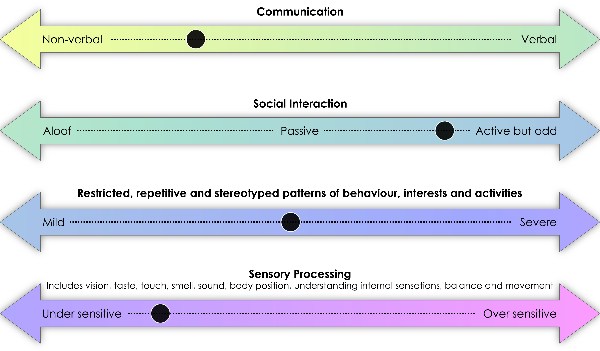 When diagnosing Autism, there are three levels of severity.  This table describes the characteristics of the condition at each level:

To conclude, ASD is a type of neurodevelopmental disorder characterised by deficits in social communication and social interaction and the presence of restricted, repetitive behaviours. With the right supports and services we can empower individuals with ASD to lead a fulfilling and valued life.

We have a more technical factsheet about Autism available on this website to read and we also offer online courses on supporting individuals with ASD together with the book by Dolly Bhargava: Positive Behaviour Support Strategies for Students with Autism Spectrum Disorder.