Students who are motivated show involvement in learning, a positive emotional tone, and persevere in the face of challenge. Unmotivated students, however, can exhibit internalised behaviours such as absenteeism or classroom passivity, reluctance to participate and cessation of effort; or externalised behaviours such as aggression, destruction, oppositional behaviours or delinquency. While rewards can help motivate a student in the short term, students can become hooked on these rewards, making them quite detrimental in the long run. So if we want our students to be motivated, but run the risk of getting them hooked on rewards, how can we motivate good behaviours?

There are two types of motivations: intrinsic and extrinsic. Intrinsic motivation is when the reward for participating in an activity or behaving in a certain way is internal. For example if you may do something because it makes you feel good, because it satisfies your curiosity, or because it gives you a sense of independence, belonging or accomplishment, you are intrinsically motivated to do that activity.

When a student is not intrinsically motivated to produce certain behaviours or do certain activities – for example, if they’re disinterested in the topic or find the activity too challenging – providing an external reward can be a useful way to motivate them. Used on their own, however, extrinsic rewards can create a harmful system where the student will refuse to behave and participate as expected in the absence of the reward.

Research shows that the use of extrinsic rewards for tasks and/or behaviours that a student is already capable of diminishes intrinsic motivation, i.e. the more you try to motivate students to do their homework by giving them a prize when they complete it, the less likely they are to do their homework because it helps them learn. Further, as time goes by, a student may demand bigger rewards, or rely on rewards for tasks and behaviours for which they previously had an intrinsic motivation. A student’s reaction when asked to do something becomes “What’s in it for me?”.

Thus, it’s crucial that for each student we first clearly identify the target behaviours and/or activities that we need to motivate them to demonstrate or complete. For those targets, we can initially provide extrinsic reinforcers, but we need to gradually fade the reinforcers out over time to move the student towards developing an intrinsic motivation. We can achieve this by building a relationship with the student – helping them develop a deep understanding of the importance of and/or bene?ts of engaging in a particular activity or behaviour. In doing so, the extrinsic reward can eventually be removed entirely, leaving the student with intrinsic motivation and a much more positive outlook on their learning and time at school.

In the example below, all the students in the classroom wanted to be at the front of the line. To help motivate students to stand in the other places in line, we needed to use extrinsic motivations. A chart was made that allocated each student a place in line for the day. These numbers were rotated each day, i.e. the student who was 1 Monday moved to 2 on Tuesday, and 3 on Wednesday, etc. The visual was beneficial especially for students with Autism Spectrum Disorder As being number 1 was intrinsically motivating, no reward was offered; an external reward was offered for all other students in the line. The value of the extrinsic rewards was increased the lower a student was in the line. 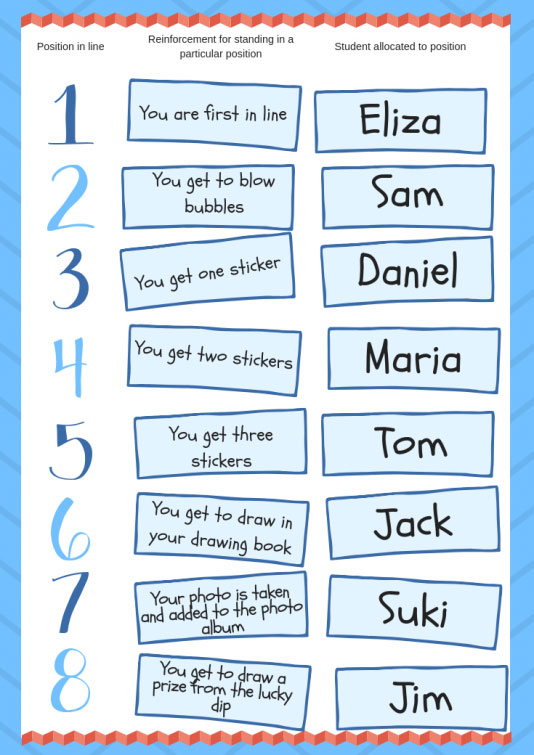 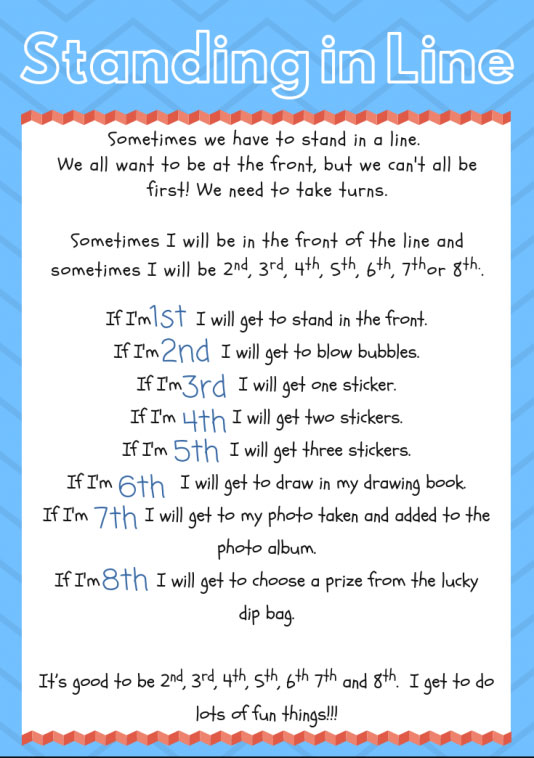 After a term, the extrinsic rewards were replaced by intrinsic rewards (i.e. instead of receiving a reward students would give/provide service). As a result, the students were not so focused on being first in line, and lining up was a more positive experience for all. 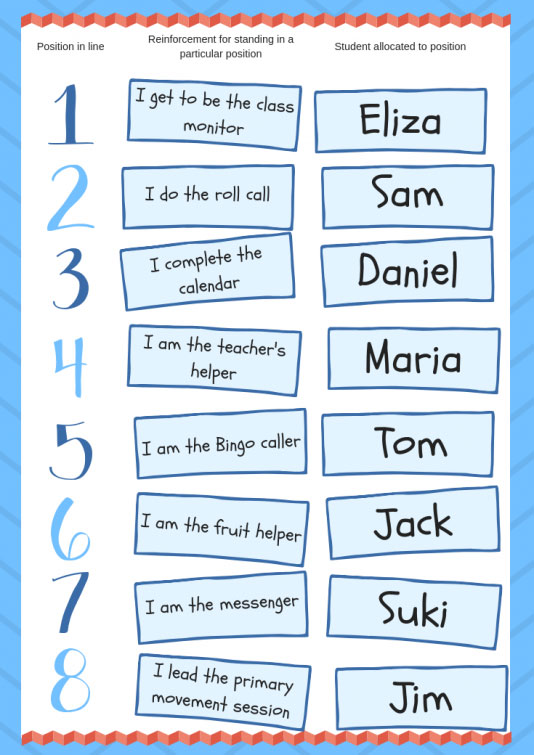