Stealing is defined as the act of taking something that belongs to someone else without their permission and with no intention of returning it. Stealing comes in different forms and severity. It can include using the parent’s credit card to pay for something online without permission, taking a chocolate bar from the fridge that belongs to someone else, walking out of a shop with a top that hasn’t been paid for, illegally downloading music, movies or software without paying, or taking the school iPad home with no intention of returning it.

Stealing behaviour as a part of normal development

For a range of reasons that are a part of normal development, many children have taken something that does not belong to them at one time or another, especially in the early years (up to age 4). For example, a toddler who takes his mum’s mobile phone, runs away and tries to hide because they like how their mum runs after them. Or a 3-year-old who can’t understand why they cannot take a toy their friend has that they like because they are still learning the concept of ‘yours’ vs. ‘mine’. Or a 4-year-old who picks up a lollipop without the parent realising and then walks out of the store.

The child does not realise things in a shop cost money and that they cannot just take what they want without paying for it. They also have not grasped the concept of ownership so can’t understand why their parents are asking them to return it. When children mature, and with guidance from caregivers and society, they begin to understand that taking something that belongs to another person without permission is wrong. They develop the ability to control their impulses and not just give into the impulse of taking what interests them. They are able to stop and think about the consequences of their behaviour and the impact of their actions for themselves and the potential victim before they act.

Stealing as a behaviour of concern

For some children, stealing becomes persistent and chronic. Stealing can cause negative consequences for the child, the family, and the community at large.

Take the scenario in a classroom. Andrew has been taking money out of his teacher’s purse at least two–three times a week over a month. His teacher hadn’t noticed until one day when she realised fifty dollars was missing and was shocked to see Andrew with a big lunch with lots of tasty treats. She knew Andrew’s mum never gave any money to him to buy food from the canteen and it made her realise that Andrew had been consistently buying food over the last couple of weeks. She remembered asking Andrew a few weeks ago how he could afford lunch every day, but he was unable to explain how he was able to afford it. Andrew’s teacher felt a range of emotions: embarrassment because she had missed it for so long, and betrayal because she thought she had a good relationship with Andrew. When the other children found out, some responded by calling Andrew a thief, blaming him every time something could not be found and were vigilant around him and told him not to take their things. Andrew felt really embarrassed when he got caught. He felt ashamed and apologised profusely to his teacher. He explained how he was jealous of all the other kids being able to buy things, but not himself. He believed there was no other way of getting the money apart from stealing. Being able to buy treats made him feel better, especially as he would share them with his friends; and because he had not gotten caught, he kept doing it. While he feels he has changed and wants to move on, he is frustrated because the other children keep referring to the incident and he is fed up with nobody trusting him.

When stealing behaviour is prolonged and ongoing, it becomes ingrained in the child.

Stealing affects everyone involved, and the child who is stealing requires necessary help to learn positive ways of behaving and managing their emotions.

Positive  Support (PBS) focuses on evidence-based strategies and person-centred supports that address the needs of the individual and the understealing questioning causes of behaviours of concern, to enhance the quality of life for both the individual and those that support them.

PBS recognises that there is no single cause for stealing behaviour . It is a complex that is a product of the interaction between multiple factors contributing to its development and persistence.

Stealing behaviour is like the tip of the iceberg so it is essential to look beneath the surface to work out the why before we can address the problem. Behaviour Help resources are at hand. 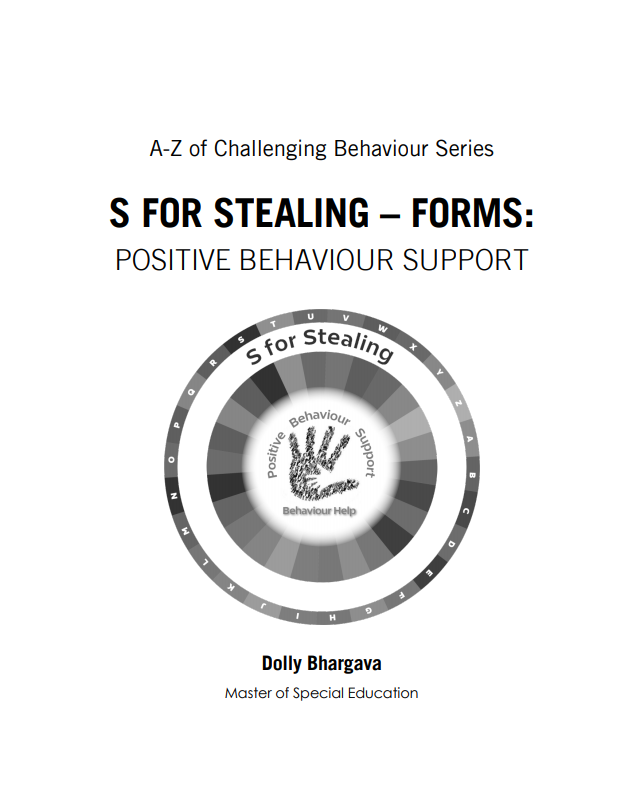 The forms contained in this pdf booklet are from the S for Stealing: Positive Behaviour Support guide that can be used as part of the process of developing a PBS plan.

Use the practical tools (checklists, forms, and strategies) in S for Stealing: Positive Behaviour Support book to develop comprehensive PBS plans that can be used to support children of all ages consistently in all settings.