Lying is as any form of behaviour the function of which is to mislead other/s, by providing false information or depriving them of true information (Levine & Schweitzer, 2014; Smith, 2004). The information being lied about includes actions related to person/s, activity/s, item/s, location/s, transport/s, time/s and personal information. The act of “lying can be conscious or unconscious, verbal or nonverbal, stated or unstated” (Smith, 2004, p. 14).

Lying as a part of normal development

For a range of reasons that are a part of normal development, children lie. As children mature and with guidance from caregivers and society, moral development occurs. Moral development, based on social and cultural norms, rules and laws, refers to the process through which children form a progressive sense of what is right and wrong, proper and improper attitudes and behaviours towards other people, and an understanding of how to make the right choices (Dorough, 2011; Usakli, 2010). In relation to lying, children begin to understand why lying is wrong and develop the ability to control their impulses and not just give into the impulse of lying. They are able to stop and think about the consequences of their behaviour and the impact of their actions for themselves and the potential victim before they act.

For some children, lying becomes persistent and chronic. When lying behaviour is prolonged and ongoing, it becomes ingrained in the child. Lying affects everyone involved, and the child who is lying requires necessary help to learn positive ways of behaving and managing their emotions.

Lying can cause negative consequences for the child, the family, and the community at large. When children lie it can leave others feeling hurt, angry or frustrated, but worst of all, it will make it difficult for others to trust the child.

Consequences for the child include others losing trust in the child, lost relationships, lost opportunities, loss of respect, the need to tell more lies to avoid having to face the consequences.

Hence, lying behaviour affects everyone involved and the child who is lying requires necessary help to learn positive ways of behaving and managing their emotions.

PBS recognises that there is no single cause for lying behaviour . It is a complex that is a product of the interaction between multiple factors contributing to its development and persistence.

Lying behaviour is like the tip of the iceberg so it is essential to look beneath the surface to work out the why before we can address the problem. Behaviour Help resources are at hand. 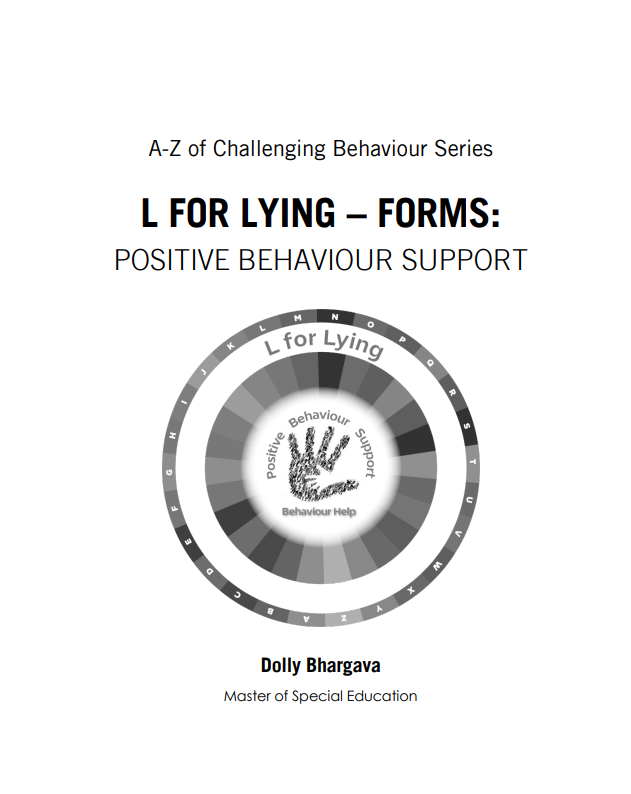 The forms contained in this pdf booklet are from the L for Lying: Positive Behaviour Support guide that can be used as part of the process of developing a PBS plan.

Use the practical tools (checklists, forms, and strategies) in L for Lying: Positive Behaviour Support book to develop comprehensive PBS plans that can be used to support children of all ages consistently in all settings.