Kicking is defined as any occurrence of using the foot/feel or leg/legs to make contact with any part of another person’s body (Dalphonse, 2020). Kicking can vary in terms of the force that is used such that the contact makes a sound or causes injury that can range in severity from a minor injury (e.g. mark) to major injury (e.g. lacerations).

Kicking as a part of normal development

Almost all children have displayed kicking behaviour in the early stages of development (up to five years of age). A child may kick a caregiver because they have taken away their toy, kick a peer who is sitting on their chair or kick a child who is simply sitting in front of them.

When children mature, they develop appropriate ways of communicating their needs, interacting with others, problem-solving, coping with their emotions and controlling their behaviours, which helps them outgrow the kicking behaviour.

Some children, however, continue to kick, which can be distressing for others to witness. When kicking becomes persistent and chronic, it can cause negative consequences for the child and everyone else involved.

When a child begins to persistently exhibit kicking behaviours, the climate of the context (e.g. childcare, preschool, kindergarten, school, disability support and youth service) can change dramatically. A considerable amount of time and energy can be spent on the child showing the kicking behaviour, which can have a deleterious effect on the quality of the educational experience for all children. Research consistently shows that managing behaviour is linked to staff experiencing high levels of stress, burnout, and job dissatisfaction.

Ms Smith is having trouble with nine-year-old Tommy, a child in her class. He often kicks other children in the class, and when Ms Smith tries to put him in timeout, he screams in her face, swears and calls her names. After ten minutes of timeout, Ms Smith approaches Tommy and tries to explain why his behaviour was wrong, but Tommy pretends he can’t hear her. After one timeout session, Tommy tries to explain his behaviour by saying that other children in the classroom were trying to trip him over, but Ms Smith knows that the kicking started after another student accidentally pushed his chair out as Tommy was walking past. Tommy has been in timeout so often in the last few weeks that he has missed many class activities, and his behaviour has caused other children to not want to sit near him. When Ms Smith calls Tommy’s parents into the classroom to discuss his behaviour, his mother shouts at and threatens him.

Hence, kicking behaviour affects everyone involved and the child who is kicking requires necessary help to learn positive ways of behaving and managing their emotions.

Positive  Support (PBS) focuses on evidence-based strategies and person-centred supports that address the needs of the individual and the underlying causes of the behaviours of concern, to enhance the quality of life for both the individual and those that support them.

PBS recognises that there is no single cause for kicking behaviour . It is a complex that is a product of the interaction between multiple factors contributing to its development and persistence.

Kicking behaviour is like the tip of the iceberg so it is essential to look beneath the surface to work out the why before we can address the problem. Behaviour Help resources are at hand. 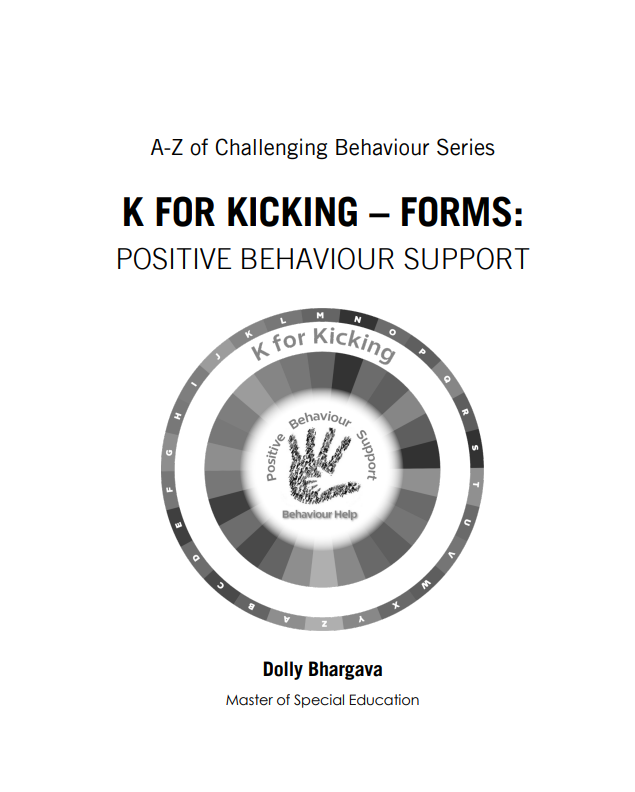 The forms contained in this pdf booklet are from the K for Kicking: Positive Behaviour Support guide that can be used as part of the process of developing a PBS plan.

Use the practical tools (checklists, forms, and strategies) in K for Kicking: Positive Behaviour Support book to develop comprehensive PBS plans that can be used to support children of all ages consistently in all settings.