The definition of ‘excessive technology use’ is not just based on the absolute quantity of exposure; instead, it is based on how it impacts different functions (Howard-Jones, 2011). For example, a child who has to complete an assignment on the computer may spend six hours getting the assignment done. This is different to a child who spends six hours a day after school video-gaming and surfing the internet at the expense of face-to-face interactions with family, interaction with peers that are calling, exercising, and doing schoolwork.

It is important to note that excessive technology behaviour exists for a variety of reasons, and is particularly prominent in people with Attention Deficit Hyperactivity Disorder, Autism Spectrum Disorder, Depression, Anxiety disorder, personality disorder and other emotional and behavioural disorders.

Excessive technology use behaviour as a part of normal development

Using technology such as televisions, mobile phones, computers and tablets to send mail, chat, use social media, play games, watch videos or go on visit websites is part of the daily routine for most children. Technology has resulted in exciting new ways for children to communicate, learn, socialise, play, stay informed, relax, entertain and foster creativity.

Excessive technology use behaviour of concern

Technology use can become “problematic” or “excessive” when the content, duration (length of time), frequency (how often), and the posture that is adopted during its use (Mustafaoğlu, et. al, 2018), leads to the following problems:

1. A variety of health risks including:

Impact of excessive technology use behaviour

When a child begins to persistently exhibit excessive technology use, the climate of the context (e.g. childcare, early childhood, primary and secondary school, disability support and youth services) can change dramatically. A considerable amount of time and energy can be spent on the child showing the excessive technology use, which can have a deleterious effect on the quality of the learning experience for all the children. Research consistently shows that managing behaviour is linked to staff experiencing high levels of stress, burnout and job dissatisfaction.

Ethan is a fifteen-year-old teenager who has always enjoyed technology use. As soon as he would arrive home he would quickly do his chores and homework because it would be followed by technology use. His parents would set him a time limit and most of the time he would stop using the technology when the time was up. His parents realised that without scheduling outside activities he would stay on the technology all day. So during the week they booked Ethan into cricket, swimming and music classes. After those activities, no matter how late they arrived home, Ethan had to have some time on technology.

During the COVID-19 pandemic he had to do online schooling for eight months. Ethan struggled with online schooling and found the work extremely difficult. He kept falling behind in the weekly assigned tasks and it got to a point where he felt there was no point in even trying. Due to the social distancing laws Ethan could not leave the house which left him with a few options of things to do in the day. This resulted in Ethan spending an excessive amount of time on his iPad playing games, watching videos and surfing the internet. It almost got to a point that it was only during mealtimes, going to the toilet and showering that Ethan did not use technology. Over time his parents found it hard to get him to stop using it and move onto something else. Whenever they asked him to stop using his technology he would snap, yell, or become aggressive and refuse to stop. A battle would then ensue, but if his parents did not ask him to stop, he would continue playing all night without taking any breaks. Also, Ethan’s parents could see Ethan becoming withdrawn, less interactive and not willing to go outside the house.

When school re-opened Ethan refused to go back to school. The only way his parents managed to get him back to school was to give into his demands of purchasing better technology and certain games for his birthday. When Ethan returned to school, over the first couple of days he appeared to sit quietly at the back of the class working on his laptop. However, the IT department of the school reported to the teacher that he actually spent most of the day watching videos, playing games and looking at websites. The school worked with his parents to identify ways to limit his access to the laptop. If Ethan did not have access to his laptop within a class, he would often leave the class without permission within the first ten minutes. When in class he would distract other children and when told to do his work he would become easily upset, annoyed and revert to excessive technology use. During recess and lunch time he often would go to the library or the computer room to access technology. He also started skipping days when he couldn’t access the library or computer room. His parents and teaching staff are extremely concerned.

Positive Behaviour Support (PBS) focuses on evidence-based strategies and person-centred supports that address the needs of the individual and the underlying causes of behaviours of concern, to enhance the quality of life for both the individual and those that support them.

PBS recognises that there is no single cause for Excessive Technology Use behaviour. It is a complex behaviour that is a product of the interaction between multiple factors contributing to its development and persistence.

Excessive Technology Use behaviour is like the tip of the iceberg so it is essential to look beneath the surface to work out the why before we can address the problem. Behaviour Help resources are at hand. 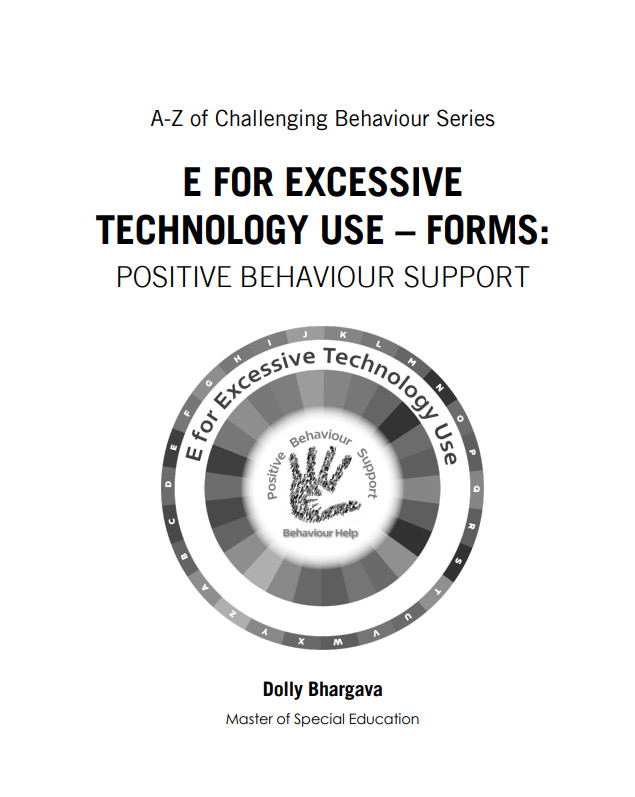 The forms contained in this pdf booklet are from the E for Excessive Technology Use: Positive Behaviour Support guide that can be used as part of the process of developing a PBS plan.

Use the practical tools (checklists, forms, and strategies) in E for Excessive Technology Use: Positive Behaviour Support book to develop comprehensive PBS plans that can be used to support children of all ages consistently in all settings.