When there is a disagreement, argumentation is the dialogic process in which two or more people engage in a debate of opposing claims (Kuhn & Udell, 2007). This exchange allows one to state their needs, concerns and views which creates the opportunity for the other person/s to become aware of what is causing the upset and for everyone involved to address the cause and move forward past the argument.

Arguing in all relationships is normal. It is impossible for two or more people to agree on everything all the time, disagreements will happen from time to time. Disagreements can be caused by differences in: views, opinions, beliefs, ideas, priorities and motivations, ways things are organised, carried out and completed, misunderstandings in communication, misinterpretations of expectations, and resistance to change and doing things differently, unreleased fear, anger and frustration.

Children develop this critical lifelong skill on how to construct and handle arguments as they mature and through guidance from adults in their environment.

Argumentative behaviour becomes a concern when the following occur:

It is important to note that argumentative behaviour exists for a variety of reasons, and is particularly prominent in children with depression, anxiety, Oppositional defiant disorder, Conduct disorder, Intermittent explosive disorder and Attention deficit hyperactivity disorder.

Supporting an argumentative child is exhausting. It is as if you are walking on eggshells because you do not know what is going to upset them, and every demand you place on them results in an argument. For example, what may seem to a be a simple instruction such as ‘sit on the mat’ or ‘join a group activity’ may result in a straight out ‘No’, and if the adult does not back down a heated argument results. Adults also become wary about confronting the child because the child sees themselves as definitely right and others definitely wrong, which means that it is hard to reason with the child or back down. It can leave everyone feeling at a loss because nobody knows how to set limits and get the child to do what they are supposed to be doing.

John has been diagnosed with Oppositional defiant disorder. John wants a pen from the table where Paul is sitting. As Paul is in the way, John walks up to him and pushes him so he can get the pen. Paul, who fell off his chair when John pushed him, starts crying. The teacher comes over and tells John to apologise, but John looks confused and says, ‘Why do I need to apologise? If anyone should be apologising, it’s him.’ Stunned, the teacher asks why Paul needs to apologise. John says, ‘I wanted the pen off the table. Paul saw me coming. He should have moved out of the way. But because he was in my way, he left me no option. I had to move him. I didn’t even push him as hard as he says, it was just a tap. He’s being a drama queen and just likes to whinge. He should apologise for being in my way.’

Harry and his friend Timothy are caught running in the hallway during recess. The teacher who catches them says, ‘You know you shouldn’t be in here. Go outside.’ Harry, who has Conduct disorder, starts to swear and argue with the teacher. For everything she says, he has something to say. He has to have the final word. When the teacher realises that the situation is going to escalate, she tells the students to go outside; she returns to the staff room. Harry thinks he’s won. Now, whenever Harry sees that teacher, he smiles at her and swears just loud enough for her to hear.

When a child begins to persistently exhibit argumentative behaviour, the climate of the context (e.g. childcare, early childhood, primary and secondary school, disability support and youth services) can change dramatically. A considerable amount of time and energy can be spent on the child showing the argumentative behaviour, which can have a deleterious effect on the quality of the learning experience for all the children. Research consistently shows that managing behaviour is linked to staff experiencing high levels of stress, burnout and job dissatisfaction.

Positive Behaviour Support (PBS) focuses on evidence-based strategies and person-centred supports that address the needs of the individual and the underlying causes of behaviours of concern, to enhance the quality of life for both the individual and those that support them.

PBS recognises that there is no single cause for argumentative behaviour. It is a complex behaviour that is a product of the interaction between multiple factors contributing to its development and persistence.

Argumentative behaviour is like the tip of the iceberg so it is essential to look beneath the surface to work out the why before we can address the problem. Behaviour Help resources are at hand. 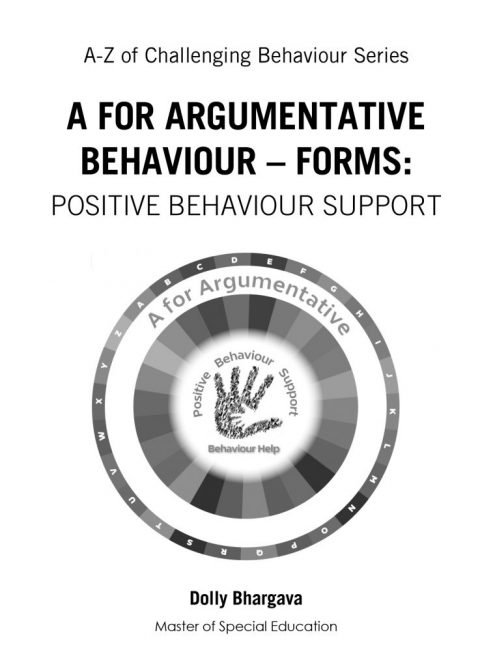 The forms contained in this pdf booklet are from the A for Argumentative: Positive Behaviour Support guide that can be used as part of the process of developing a PBS plan.

Use the practical tools (checklists, forms, and strategies) in A for Argumentative: Positive Behaviour Support book to develop comprehensive PBS plans that can be used to support children of all ages consistently in all settings.